On an unremarkable day in Cairo four years ago, it was business as usual for one of the best women’s basketball players in Egypt. Until a chance encounter with a begging father changed everything.

At 25, Yasmin Helal was working at Alcatel-Lucent, one of Egypt’s prominent telecommunications firms, unaware that when she stepped out for lunch that day she would bump into the man who would change her life.

The man didn’t recognize Helal as his nation’s best point guard; he only saw a lifeline, an opportunity to ask someone wearing nice clothes for $20 so that he could pay for his three daughters to go to school.

“I felt guilty,” Helal says. “I live in the same city as this guy who couldn’t afford to send his daughters to school, and the amount of money he needed was equivalent to a Burger King combo.”

That guilt quickly blossomed into a quest for change. Helal was overwhelmed by the notion that she was surrounded by young girls who would never have the same opportunities she had been afforded. So in January 2011, amid the revolution that would unseat longtime president Hosni Mubarak, Helal left her promising career as a digital engineer to start a nonprofit foundation. She called it Educate-Me. On the outskirts of the bustling metropolis of Cairo, Educate-Me sits in the overcrowded, poverty-stricken neighborhood of El Konayessa. The foundation’s mission is to provide innovative educational opportunities to the area’s underserved children.

“I felt guilty. I live in the same city as this guy who couldn’t afford to send his daughters to school, and the amount of money he needed was equivalent to a Burger King combo.”

Educate-Me began as a grass-roots effort to send three young girls to school. Three years later, it has evolved into a fully functioning supplemental education center that serves 200 students annually with the demand for seats ever growing, as the waiting list currently exceeds 450 people. The rapid realization of Helal’s vision has garnered international attention — she was chosen as a member of the Global Sports Mentoring Program Class of 2014. The program is the cornerstone of the U.S. Department of State’s Empowering Women and Girls through Sports Initiative.

For Helal, the recognition is quite an accomplishment for a girl who once had trouble simply fitting in. Her mother encouraged her shy, quiet daughter to try sports, thinking competition and teamwork would encourage the young girl to come out of her shell. She was right.

“When I joined the basketball team everything changed,” Helal says. “It was unbelievable. Everything made sense. I learned what it meant to be part of team. At 11, when I became the team captain, it was the first time I really felt like I was responsible for something, for other people.”

Helal played through her college years and while working at the telecommunications firm. She retired in 2012 to focus on her foundation.

Her early efforts were locally focused, rallying support from old colleagues and friends through Facebook. But she was jolted by the reality that simply raising money to reinstate children into what she considered a broken school system would have little impact on their futures. Helal founded Educate-Me with the intention of teaching children how to think, challenging the rigidity of the public school system by cultivating her students’ creativity. Educate-Me offers classes in subjects as diverse as language instruction, fashion and, of course, basketball. For the latter, Educate-Me has teamed with Girl Power Egypt, a basketball program started by 2013 Global Sports Mentorship Program participant Hayam Essam.

Helal also insists that the kids be allowed to develop their own school projects, as long as they come up with a good plan to finance and execute their ideas. 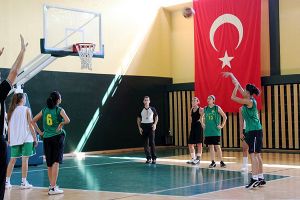 As interest in Educate-Me grows, funding streams have expanded, and she’s raked in international awards, including as the King Abdullah II Award for Youth Innovation and Achievement. Partnerships with corporations like IBM have helped Helal and her team of 12 staff members and 60 volunteers provide additional resources and opportunities to more children in need. The program’s students even pitch in, selling their own crafts at local fundraising events.

Generating widespread support for Educate-Me’s vision hasn’t been easy. Helal’s innovative approach requires detailed explanation to locals who can be reluctant to challenge the status quo.

“Our education is limited to our current formal school model in Egypt, which made explaining Educate-Me and getting buy-in very challenging,” Helal says.

Despite the skeptics, Helal remains committed, as she knows firsthand the importance of experiential learning, attributing much of her success to the skill she honed on the court.

“Basketball was a real experience; the opportunity to try things and take risks at a very early age was very empowering. Taking risks ranging from playing through an injury to taking a shot at the last minute of the game, when the team is losing. It was an environment that gave me the opportunity to try things, be on the spot, let people down and make people happy. It was very real, you do something and there is a consequence.”

That skill set has been critical to Educate-Me’s success, too. Helal points to a 12-year-old named Eman, who had difficulty making friends and following rules when she first came through the foundation’s doors. Three months after joining Educate-Me’s girls’ basketball program, Girl Power, Eman blossomed, Helal says. “She became much more self-confident, she bonded with the other girls and developed a great deal of perseverance, noticeably trying harder and not giving up quickly like she used to.”

In a world in which violence at home and in school are commonplace, the opportunity to just play is imperative to healthy female development.

“So many people thought I was crazy and it was too late to start over. But when I would talk to people about what I was going to do, I could see it in their eyes — they would die to do the same.”

Eman’s breakthrough moment, just one of many since the opening of Educate-Me’s doors, serves as the only evidence Helal needs that taking a leap of faith and changing her life course was the right decision. Sitting comfortably in her office as children and her staff laugh in the background, Helal can look back and smile at the thought of the reactions from friends and family when she told them about her plan to launch the foundation.

“When she told me she was going to quit her job, I was not completely convinced,” says her mother, Nahla Marei. “She was about to rise to a very good position at the telecommunications firm. But it was her dream to do something that was better for our society. And I had to respect her dream.”

Her mom was not the only one worried by the radical decision. Others close to her were not shy about sharing their opinions — which mostly revolved around whether Helal had lost her mind.

It is safe to say the critics have been silenced. Helal remains focused, preparing for her journey to meet her U.S. mentor and continuing to push boundaries to empower children.

“So many people thought I was crazy and it was too late to start over,” she says. “But when I would talk to people about what I was going to do, I could see it in their eyes — they would die to do the same.”